Buying meat is Atef’s job. In fact doing the grocery shopping is mostly a man’s job, something that I’m still not entirely accepting of as I love shopping for food. There are several reasons behind why it happens this way and I will write another post about it.

In Wadi Musa, butchers are very traditional and typical of the Middle East. There are a couple in the market centre of town. At the butchers you can only buy red meat. The meat is fresh, very fresh. The beast is killed in the morning with the meat sold during the course of the day. The only hanging time that the meat receives is the hanging during the day until you purchase the meat. I find that this tends to make the meat quite tough and I prefer to buy meat and then keep it in the fridge for a few days or freeze it for later use so that it’s not quite so tough. This way I also have the type of meat available that I want to use. Let me explain…….

The meat that is available for purchase tends on what beast the butcher has killed that day be it a sheep, goat or cow. This does not mean that there is a choice available as generally a butcher will only kill one beast per day. Beef tends to only be available once a week and then it’s not like it’s on a set day of the week, so I have to ask Atef to look out for when a butcher has beef available and buy it. The butcher advertises what meat they have available for the day by hanging the whole carcass outside his shop. No refrigeration and if it’s lamb or goat the carcass is not even wrapped in plastic to protect it. 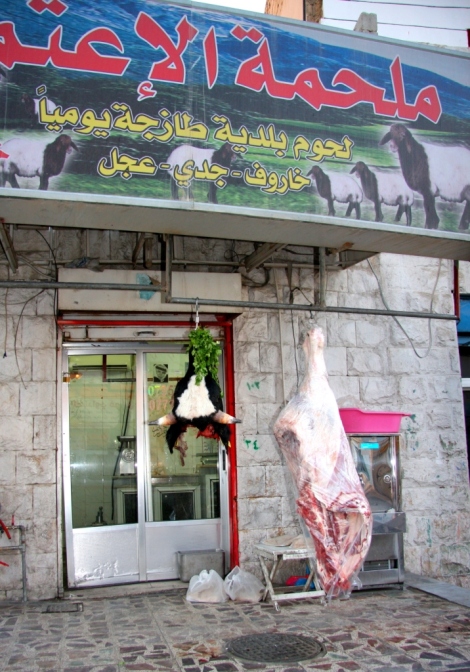 Beef available today! The parsley is to keep the flies away!

The beast is not cut up into specified cuts of meat that I’m used to being able to buy in Australia. The only way I can describe it is when you ask for some meat a piece is hacked off the carcass bone and all. You pay per kilo according to the quality of the meat (where it comes from off the beast), but it’s not cut into a steak, or a roast etc etc. I have all but given up on buying mince meat as it tends to be full of too much grizzle, small bits of bone and offal for my liking. There is only one butcher that I get Atef to sometimes buy mince from, but tend to just make my own.

When Atef first started buying meat for us, for him there was no difference goat and lamb. I have noticed here that the animals (goats and sheep) all get called sheep and it’s the same for the meat. I don’t mind goat, but it’s not my preferred choice of meat. Also when it’s killed and not hung it tends to be incredibly tough and very strong in smell and flavour which I find not enjoyable. I have had to be very clear to Atef about what type of meat to buy and to only buy sheep sheep, not goat sheep.

We don’t eat much red meat as it is expensive to buy at around 14-15JD per kilo especially when I don’t consider that the meat is great quality. This equates to about $17-21 Australian dollars per kilo. When the average Jordanian wage is only 200JD per month (about $285 per month), red meat becomes unaffordable for most people. This is the price for local red meat. Interestingly imported red meat from countries such as Australia (live sheep and cattle trade) is cheaper at around 8-10JD per kilo ($11-14 per kilo) but is considered to be inferior in quality compared to local meat. As Wadi Musa is a very traditional, conservative, country village the butchers almost exclusively only stock local red meat with the exception of the beef (which because it’s not as readily available is expensive anyway). Generally the only imported red meat I tend to be able to buy is frozen lamb which is from China and this at the only mall in town which is an expensive shop.

2 responses to “At the Butchers”