Plugging appliances in to make them go is not a straight forward easy task. It isn’t simply a case of getting the appliance and plugging it into the power point and hey presto it’s all systems go.

Here it’s a case of finding the right outlet point or the right adapter for the appliance before you can plug it in and even once it’s plugged in it’s still not a case of hey presto and all systems go.

Let me explain. I thought that when we were living in the rented house it was just a case of old house and old power points and new appliances as to why the appliance plugs didn’t fit into any of the powerpoints. The appliances all had a 2 prong round outlet that were all too big for the 2 prong sockets on the wall so everything was being run through an adapter – and I mean everything, the fridge, tv, heaters etc were all fitted with an adapter so that I could plug them into the wall. This lead to the further problem of sometimes when we would get brown outs or a surge in power that the adapter wouldn’t be able to cope with the increased voltage or just get to hot from continuous running and would burn out. It was almost a case of adapters being a regular item on the weekly shopping list.

And I was always having to find a spare adapter to plug in occasionally used items like the hair dryer, food processor, iron and vacuum cleaner. The computer needed it’s own special adapter as it had a three prong square European plug and when the adapter for that burnt out Atef got creative and cut the 2 prong round plug from the fan off and connected it to the computer cable. This meant that to run the fan I had to insert the 2 wires from the power cord either directly into the powerpoint (not something that I was that keen on!) or try and find yet another adapter and insert the wires into it, insert the adapter into the wall and then jiggle the 2 wires around in the adapter to get a connection. It was incredibly frustrating not to mention that I was always terrified to electrocuting myself or coming home to find the the house had burnt down due to a malfunctioning adapter.

Then on top of this I was running some Australian appliances which had a 3 prong Australian plug so they also had to be run through a different type of adapter. At least this adapter which was bought with me from Australia was more durable than the cheap and crappy ones that you could buy in Jordan and survived the numerous brown outs/power surges.

I had talked to Atef about all of these problems and asked if it would be the same in our new house. He assured me that it would be fixed and that appliances could be plugged directly into the wall.

We move into the new house. I go to plug in the vacuum cleaner and to my utter frustration it did not fit into a single powerpoint in the house. Same problem – all the powerpoints were too small for the appliance plugs. The standard powerpoint that is sold in Jordan does not fit any of the appliances that are sold. Where is the logic in that I ask?! And then there was the problem that I couldn’t plug in the microwave or fridge as they had the 3 point square European plugs.

Ok so I might have vented my frustrations about stupid standard powerpoints sold in Jordan not fitting any of the plugs of the sub standard inferior quality appliances and I wasn’t going to use any stupid cheap adapters that burn out every week and that I was never going to vacuum the house and that it would just be messy when everyone visited (akin to a crime in Jordan and the worst kind of shame possible – post coming later on cleaning) and I might have just vented this all directly at Atef but the he must have got the message about his wife’s extreme frustration. Within the hour Atef had returned with a whole bag of powerpoint sockets that surprise surprise fitted the big round plugs of all the appliances. He had the correct sockets for the fridge and microwave and he even had socket that fitted the Australian appliances!

Subsequently I have solved the problem for a girlfriend (who is also an Australian expat, married to a Jordanian here in Wadi Musa) who having just built a new house was also getting very frustated with the plugs not fitting powerpoints and adapters burning out, by giving her one of the multi purpose powerpoints to show to her husband so that he could change the ones over in their home. I wasn’t alone in my frustration!

I still don’t understand how the powerpoints that are sold as standard don’t fit any of the appliances that are available to buy. Just doesn’t make any sense. Maybe someone high up has got shares or owns the company that makes the adapters? 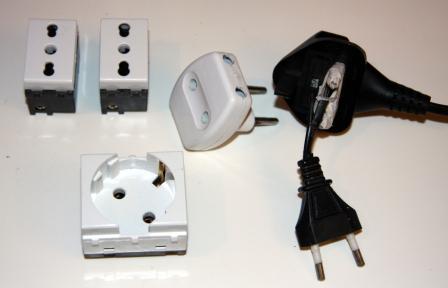 The top two power sockets look the same, but if you look very closely you will see that the one on the left has ever so slightly smaller holes than the one on the right. It’s this tiny tiny size difference that makes all the difference with being able to plug appliances in! Why they just don’t sell only the bigger sized one I will never know as appliances that have the smaller prong power plugs (I only have one in the whole house!) fit into the bigger size outlet which is what all the other appliances use. Check out Atef’s creative work for the computer cable! And yes I still have to have adapters – to run the fan that still has just two loose wires and also the electric drill which operates on the same principle as the fan!