We ended up getting about 30cms of snow from early Wednesday morning to Thursday evening.  There was even some snow down in Petra. I was asking the locals when was the last time that we had snow like this and they said back in 2006 there was a fair bit of snow, but it was over the whole winter, not in 2 days. As quickly as the snow came it’s melting again.  The last few days the sun has been shining and the snow is retreating from the lower areas. I think that it will stay put on the hilltops higher looking up towards Taybeh, but it definitely will be gone from around our house within a few days. It was beautiful whilst it lasted. And lots of fun! Inshallah we get some more snow this winter but it will remain to be seem as to whether we get this much in the lower areas and around our house.

What I didn’t enjoy so much on Friday was the clean up that comes with having 30cm of snow on your roof – a flat roof made of concrete. So it was important to get rid of the snow and water as concrete is a porous surface and also there is no insulation in our roof – it’s just a concrete slab. 30cms of snow, ice and water sitting on the roof certainly wasn’t helping with keeping the house warm. That and we discovered a not so desired quirk of our house – the roof leaks. Actually that’s not an accurate description – it was raining in our bedroom. To say that Atef wasn’t impressed was an understatement and it was a time when I didn’t need to understand Arabic to understand what he was saying to the builders. Seems that with the roof only being 12 months old, and as concrete keeps curing for years that combined with having close to half our annual rainfall in 1 night and then following this up with a windchill temperature of -20 degrees Celsius and 30cms of snow the next night that the roof developed a crack.  Atef and I spent the best part of 4 hours shoveling snow and sweeping water off the roof and balconies, which was what it seemed most of our neighbours were doing as well.

On Thursday afternoon when the snow was at it’s peak I took some photos of some things that were it not for the snow might appear just ordinary. I loved how the snow turned even weeds to look like beautiful frosty jewels. 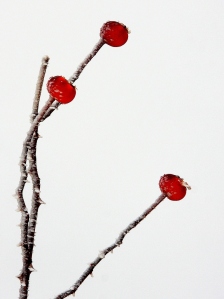 This was the view that I was treated to when we awoke on Friday morning. The sun was shining and there wasn’t a cloud in the sky as the sun rose over the Petra mountains.

We also took Alia for a quick play in the snow on Friday morning. She was very fascinated with the cold white stuff. Her bath made a perfect sled.

Alia and I enjoying the snow. 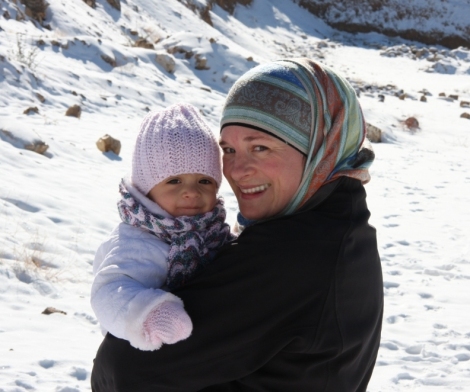 One last photo of the snow to enjoy. This was the sunset from the evening of the 12th January. unfortunately much of the snow had already melted, but I still thought this sunset was beautiful and worth sharing.

2 responses to “The fallout from the snow.”