Crazy to think that this time last week we had snow on the ground around our house and it was freezing when today was a balmy 15 degrees Celsius, clear blue skies and only a light breeze. I didn’t even turn the heater on today. Atef and I decided that we should make the most of this glorious winter’s day and we had a BBQ for dinner. Making a BBQ is one of my favorite ways to spend some time with family or friends and is definitely a favorite way of eating food.

Before Alia, Atef and I would frequently drive somewhere around Wadi Musa and make a BBQ in the late afternoon sun and drink Bedouin tea watching the sun go down. Now that we have Alia rather than have to give up something that we love doing together we have come up with a great compromise and instead of driving somewhere we have the BBQ outside our house or on the balcony and watch the sun go down over the beautiful view that we have here.

BBQ’ing (Meshawi in Arabic) in Jordan is done over hot coals imparting an intense delicious smokey favour to the food. Our simple BBQ tonight consisted of chicken which has been marinated in Arabic spices with olive oil along with potatoes and onions cooked in the coals. Served with some Arabic flat breads, a simple salad of freshly sliced cucumber and tomatoes, green olives and yoghurt and it was an incredibly satisfying meal. 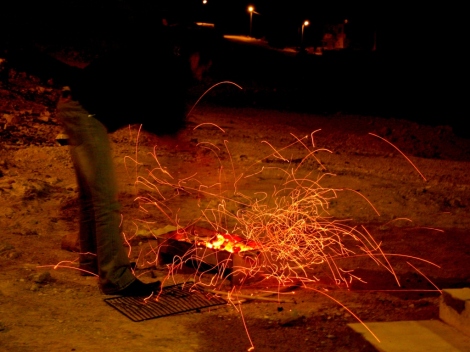 Atef fanning the coals to get them to the desired temperature.

The coals all ready and the rest of our alfresco meal.

I marinated the chicken in the Arabic spice mix, salt and pepper and olive oil for about 3 hours. I like to leave the skin on which then becomes blackened and crispy over the hot coals. Check out my post on Arabic spiced chicken for a suggested recipe for the Arabic spices. To 1 whole chicken cut into pieces I use approximately 1 heaped teaspoon of the spices, about the same amount of salt and a pinch of pepper all mixed together with a generous glug of olive oil. Use your hands to mix everything together making sure that you rub the spices into all the chicken and under the skin. 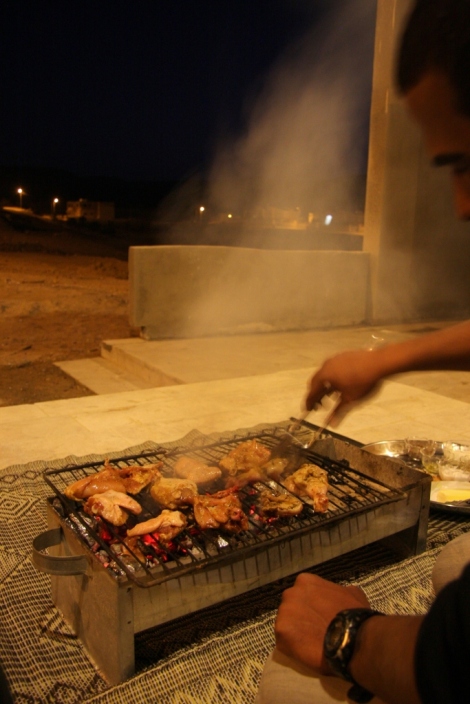