Before living in Jordan I never gave as much as a second thought to the act of going for a walk. You just put your sneakers on and off you go. Right? Well………not so here!

I have written before about walking and becoming the newest tourist attraction in town here so you can imagine that by now I’m well and truly used to being looked at when I go for a walk.

But this doesn’t mean that I’m not faced with daily trials and tribulations or hazards when I head out with the intent of walking to exercise.

There are the physical hazards of the deadly kind. For a period of a week I had to change my route to give wide berth to a nest of swarming wasps. My attention was only drawn to them in the first place when I was stung on the rear by an angry wasp. Alia and I certainly finished the rest of our walk in a hurry as I sprinted home with one hand on the pram and the other hand on my bottom! I may or may not have been yelping in pain on our short sprint home! I’m sure the neighbours if they saw me got a laugh that day. Happily I can report that the wasp nest was destroyed so hazard removed.

Tonight I came across another hazard of the deadly kind. My eyes were drawn to something as it scurried across the road in front of me. Thinking that it might have been a spider or even just a dandelion I almost didn’t give it another look until it stopped right in front of me and I noticed that there was something pointing up. I looked again and there in front of me was a scorpion with it’s tail posed and ready to strike.  I may or may not have let out a little scream, before getting a grip and striking my own deadly blow.

On going road works and the laying of a sewerage line have left our once paved road in a seriously rough state. If it’s not enough of a hazard making sure that I don’t twist an ankle on the rough surface I also have to watch out for where they haven’t finished putting the caps on the access points to the sewerage line (a nasty little drop of 3m) and then a bigger drop of 10m where they are currently cutting away the side of the road to put in stabilising wall. 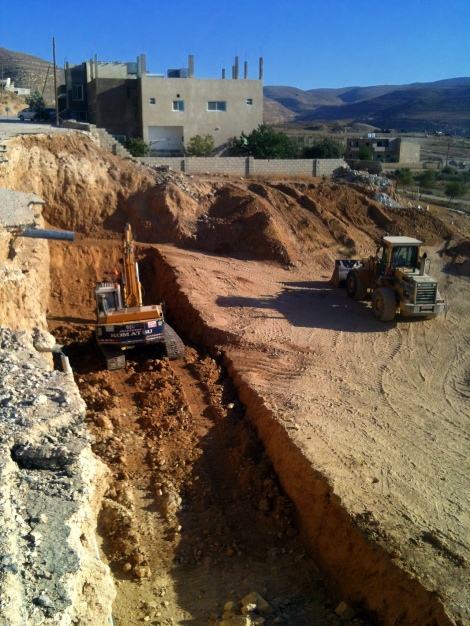 I’ve become the piped piper when walking along the road. Fortunately I don’t attract rats but I do attract kids. There are 20 kids that live on our road and it’s not uncommon for me to have at least 7 or 8 of them tagging along when I’m out walking. Alia loves having them along to talk to and laugh at. Me I have to be careful not to run any of them over with the pram as they haphazardly weave all over the road and suddenly stop right in front of the pram. I have also learnt in Arabic to say “Bes Ana Arabayah” which means just me for the pram, as they are obsessed with wanting to push the pram. They don’t seem to understand that the pram with Alia weighs 23kgs so it’s not easy to push and also that it’s not a toy as my precious daughter is inside. I’m also always having to ask them not to hang off the sides of the pram whilst we are walking along. 23kgs is quite enough to push up a hill without adding the weight of 2 small children pulling on the pram as well!

One of the more amusing trials and tribulations that I face on my daily walks is having to constantly and politely refuse the offers from the neighbours to come and have a cup of tea and some sweets. They just don’t understand that I’m not out for a social visit, but instead that I’m pounding the pavement for exercise, so I’ll keep waving and politely saying no thank you!

And then there is the not so amusing, but the downright frustrating trials and tribulations. Everyone seems to know what’s best for me and I get offered constant “advice” on where I should be walking, how long I should be walking for, what time I of day I should be going, what I should be wearing and even how I should be walking. Everyone is an expert in my well being and on my walking! I smile, pretend that I don’t understand what they are saying and continue to walk where I want, when I want, and how I want.

14 responses to “Trials and Tribulations (Just going for a walk!)”