The summer months are prime time engagement and wedding season. With Ramadan falling in summer this year this meant that there was a rush on wedding and engagements in the months leading up to Ramadan and there has been a party rush post Ramadan making the most of the warmer months.

This means that most nights of the week especially on Thurday, Friday and Saturday nights there are parties and celebrations being held all over town. What this means for me is that I get treated to an almost nightly displays of fireworks.

Before I get too ahead of myself I’ll try to explain about the customs and practices of engagements and weddings in Jordan as there are enormous differences culturally compared to the practices that I was accustomed to in Australia. So that this doesn’t become an epic post I’ll split it over a few posts starting with engagements.

Dating between a young couple is not traditional or part of the culture here in Jordan. When a couple is to get engaged in many cases they will not have meet or spoken to each other before, yet that is changing somewhat with couples having meet through attending the same university or occasionally in the workplace.

More traditionally the “matching” up is done by the mothers of sons of marrying age who will speak to other mothers in the community to find a potential bride. To get the match making under way the first contact is usually in the form of a telephone call from the mother of the son to the mother of the potential bride to see if there is any interest in her daughter in getting married.

This leads to a series of meetings, the first of which is between the two mothers where they discuss the “best interests” of their children and get to know about each others family if they didn’t know each other previously. It is still a very common practice to marry within the extended or wider family. If the mothers decide that their children could be a good match then the next meetings to take place are between the two families with all the women from both families (mothers, bride to be, sisters, sister in laws and sometimes aunties) meeting together and all the men from both families (fathers, brothers, brother in laws and sometimes uncles or the patriarch of the extended family) coming together.

Family honour is a very important issue in the Arab world. The standing and reputation of your family in the community is at the forefront of why these meetings take place and are a way for the families to get to know each other. They are determining not only if  the son and daughter would be a good match for each other but also if the two families compliment each other.  After the meetings between the family members have taken place they will go away and discuss the potential marriage and the benefits for each family of the match before a final decision is made (this is generally about 1 week.)

The final decision of whether the proposed marriage will proceed rests with the potential bride to be, even though at this stage she might not have even met her future husband. The family of the young lady will use this thinking  time to do a bit more of a “background check” on the potential groom to ensure that the young man and the family he comes from is honorable,  has a good reputation and will be able to provide for their daughter. The young lady’s family will advise her as to what they think that she should do, but it is done with her best interests at heart.

If the lady agrees to marry the man then another meeting is held generally between the men of both families where they discuss what the groom will be providing for his bride. It is customary that the groom to be will provide the bride to be with generous gifts of gold jewelry and money which would be used by the young lady to purchase a suitable wardrobe befitting of a newly married women and also soft furnishing for the marital home. It is the responsibility of the young man to provide his bride with a home and furniture. Once all of this has been decided then the contract is signed between the couple.

The signing of the contract is an important event and the family of the young man all go to the family house of the lady to celebrate the bringing together of the two families. A representative from the court attends and the contract is signed by the couple and witnessed. This contract states all things that the man will provide for the lady before, during and after the marriage in the case of divorce and any conditions that might be agreed upon between the couple. From a legal side this contract is actually the signing of the marriage certificate – in the eyes of the law the couple are technically married. In the eyes of the community the couple aren’t officially married until after the wedding celebrations.

It is also at this signing of the contract that the young man and lady might meet for the first time, albeit it being a brief encounter as they both recite the required statements for the contract and sign it.

An engagement party is held generally about one week from the signing of the contract. Engagement parties are usually on a Friday night and are a big celebration. The bride-to-be is dressed like a princess. The engagement dress is in some way just like a wedding dress except it’s not white, but it’s that extravagant and a bouquet is normally carried. The young lady will have spent the best part of the day in the salon getting her hair and make up done as it is at the engagement party that the man and lady will first touch each other and also the first time that he will see her not wearing her hijab/hair covering. 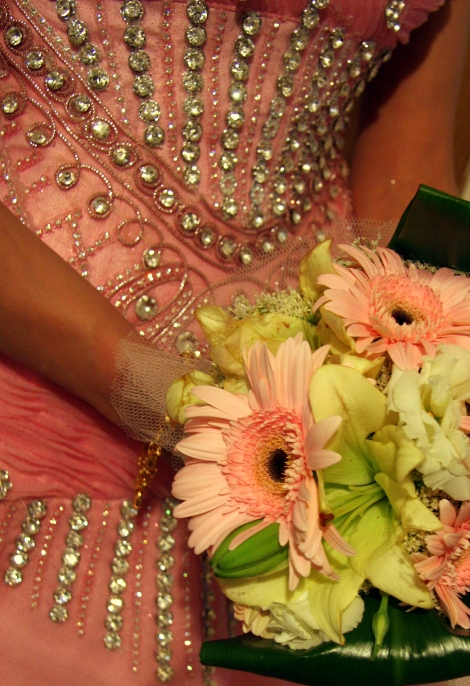 The engagement parties normally start in the late afternoon and are hosted by the bride to be’s family, either at their house, their family hall or a party venue. At the front of the venue a stage with a “throne” like chair is set up where the bride to be sits. 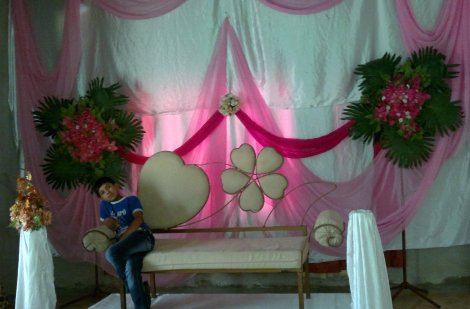 The women will be inside whilst the men will gather outside separate from the women. All the women are dressed in their best clothes and there will be dancing and congratulating of the bride to be. 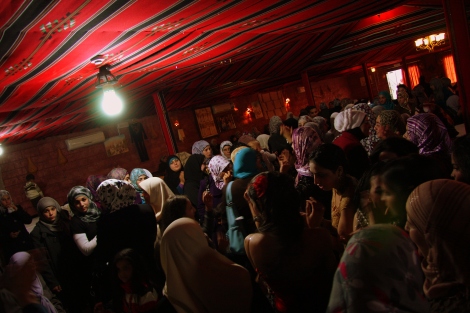 About an hour after the party has started the groom to be will be escorted by his mother or older sisters or senior women in his family inside to meet his bride to be. 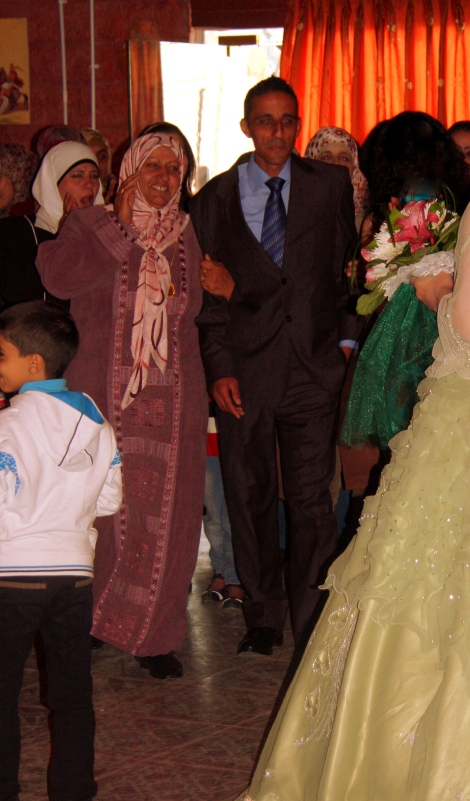 I have always thought that this would be a most nerve racking time for the young man as he is meeting his bride to be for the first time where he is the only man inside a room full of hundreds of women.

One of the more extravagant engagement parties that I attended had an actual aisle of red carpet  with arbors and vases of fresh flowers along the side set up. The bride to be waited at the top of the aisle for her groom to be to enter the hall and then they were escorted down the aisle to the front. Upon reaching the front of the hall fireworks were set off (yes inside) whilst everyone cheered and clapped the young couple.

The groom to be then presents his bride to be with the gifts of gold jewelry. There is quite a ceremony as he adorns her with bracelets, necklaces, earrings and an engagement and wedding ring set. The rings are worn on the ring finger of the right hand to signify that the young women is engaged. He might also present the bride to be’s mother and his own mother with a gift of gold jewelry. 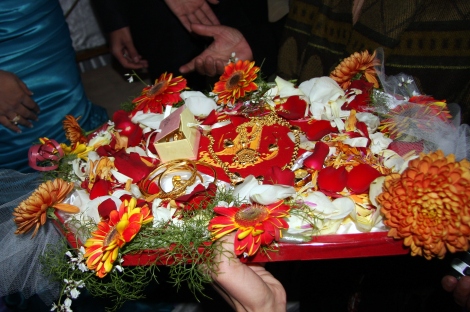 Afterwards the young couple will dance together, some cake and drinks will be given out to guests and then the party draws to a close.

From the engagement party onward the man and lady are allowed to sit with each other and this is when the couple get to know each other – it’s their dating period.

The engagement period can vary from as little as one week if the couple already knows each other to up to a year if they are both young or still attending university etc. During this engagement/dating period the couple may decide that they are not compatible and there is no shame in calling off the engagement. I have known this to happen a couple of times, but it is certainly not the norm.

Just to let you know Atef and I didn’t have an engagement party as I was daunted enough by the prospect of a Jordanian wedding.

I’ll write about weddings including my experiences in the next post.

10 responses to “Love is in the air – Engagements”